Atmospheric stability is related to the temperature distribution with height, which has an important effect for the turbulence in the atmosphere due to buoyancy effects. The main impact of atmospheric stability with respect to wind energy, is that atmospheric stability amplifies or dampens turbulent fluctuations depending on the state of the air mass. As a consequence, the properties of the flow filed changes. The most noticeable effects are changes in turbulence, wind veer and wind shear, as well as the behaviour of the flow field over terrain and obstacles. These parameters are very important for both the distribution of energy over the wind farm area and for the local turbine performance (the turbine performance aspect is described in a sperate topic).

Modern Energy has developed a method to include the effect of atmospheric stability numerically in the layout and yield calculations. As atmospheric stability influences the spatial distribution of the wind resource of the wind farm area, it is important to include the effect already in the wind farm design stage to avoid sub-optimal design. In short the method consist of the following steps:

Below is a short description of atmospheric stability and its effect related to wind farm design.

Not only the temperature gradient is important for atmospheric stability. At high wind speeds the mechanically generated turbulence often dominates the flow and the stability approaches near neutral conditions. The Monin-Obukhov (M-O) length is the most commonly used quantity to characterise the atmospheric stability. The M-O length can be described as the height of a sub-layer where the mechanically driven turbulence due to ABL shear is more important than the buoyancy driven turbulence. This means that a large M-O number corresponds to near neutral conditions. The sign of the M-O length indicates whether the atmosphere is stable (positive) or unstable (negative). For more details see Obukhov [73] and Monin and Obukhov [74]. The physical effect due to non-neutral atmosphere is to enhance (unstable atmosphere) or dampen (stable atmosphere) the vertical turbulent fluctuations due to buoyancy effects. This in turn influences the turbulence intensity, the vertical shear of the ABL (Kirchhoff and Kaminsky [75], Irvin et al. [76], Zoumakis [77]) and the length scale of the ABL turbulence (Peña et al. [44], Sathe et al. [71] and Stull [72]).

Atmospheric stability determines the flow pattern over an obstacle, whether the air flows over or around the hill and also the speed-up over the hill. It is also the reason for many interesting phenomena like low-level-jets, hydraulic jumps, mountain waves, downslope winds, internal boundary layers and vortex rolls. As shown further down this page it also affects wake loss, not only through different turbulent intensity but also different turbulent length scales. 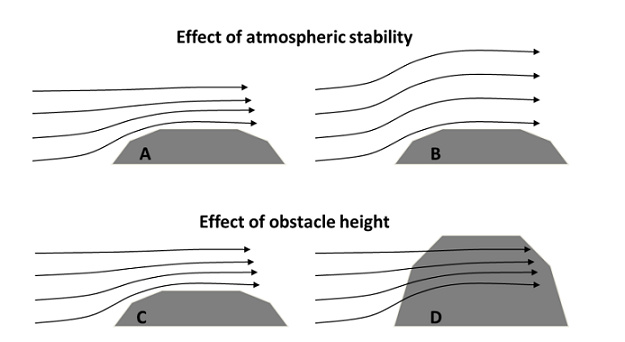 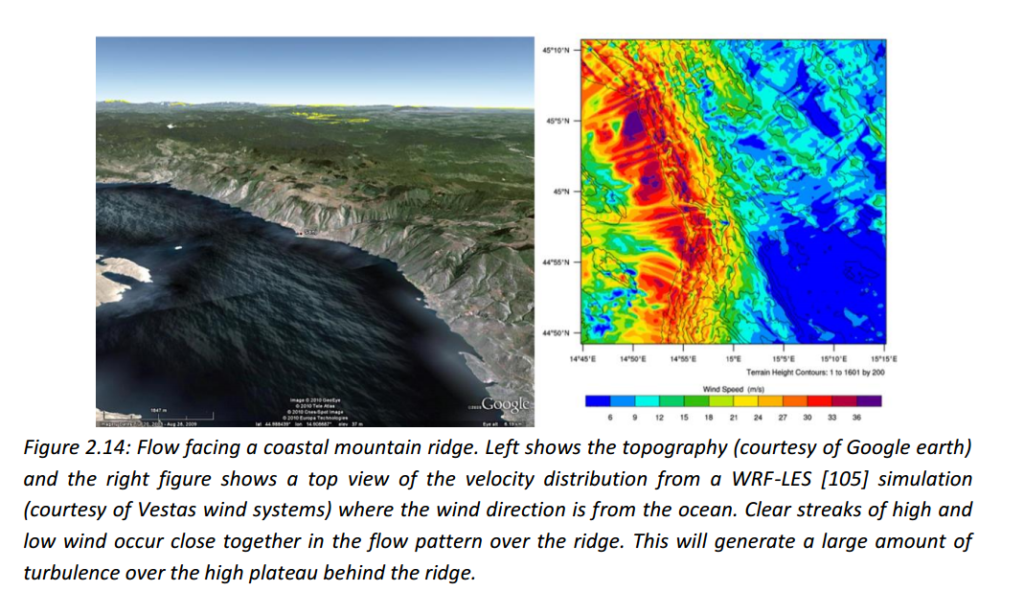