Nowadays, the majority of wind turbines are erected in wind farms for practical and economic reasons of land ownership, maintenance and infrastructure. However, an important drawback of this configuration is the turbine-to-turbine wake effects. The wake refers to the downstream flow regime of a wind turbine which is affected by the presence of the turbine. The two most important characteristics of a wind turbine wake are lower wind speeds and higher turbulence intensity. As a consequence, a wind turbine inside a wind farm experiences significantly different operational conditions compared to a solitary turbine. For modern wind farms the wake effects typically result in 5-20% lower annual energy production. At the same time, the fatigue loads of a wake-affected turbine increase by 20-80% depending on the wind turbine component considered.

The ability to predict wake effects on component loads and power production is an important aspect in both wind turbine and wind farm design. Unfortunately, simulating the effects of the wakes is a complex problem. In particular, the combination of a large range of turbulence length scales affecting the wake dynamics and the requirement of high computational speed of the wind power industry is challenging. To maintain acceptable computational time the wake models used for industrial application have to be based on reduced order physics. Current wake models used by the wind industry have two main drawbacks: 1) they are based on parametric description of the wake and are not capable of physically modelling the wake evolution and 2) they are designed to handle one aspect of wake operation (i.e. the evolution of wind speed deficit or the increased turbulence).

The DWM model was developed with the ambition of achieving a high fidelity engineering wake model where the key features affecting power production and loads of a turbine in wake operation are modelled in a physically consistent manner. Based on field observations together with physical and numerical experiments; the wake deficit evolution, the increased turbulence level in the wake and the large scale meandering have been identified as the most important processes for wake evolution. A fundamental assumption of the DWM model is the split in scales which results in the decoupling of the wake deficit evolution from the wake meandering. 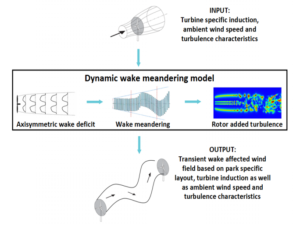 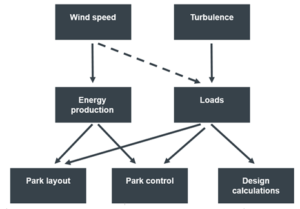 The DWM model is originally designed to be coupled with an aero-elastic solver to allow for predictions of loads and power production of wake-affected turbines. The DWM model has reached a mature level through a large number R&D efforts, as well as field data validation campaigns undertaken by both academia and the wind industry. At this stage there is a consensus that the DWM model adds value for simulating load for wake-affect wind turbines by using, and as a consequence the DWM model will be included in the next version of the IEC 61400-1 standard for wake load calculations.

A drawback of the aforementioned implementation, where the DWM model is coupled to an aero-elastic solver, is that the aero-elastic solver is two orders of magnitude slower in computational time than the DWM model. As a consequence the combined method is too slow for wind farm design calculations. To overcome this limitation Keck et al. [39, 45] implemented a standalone version of the DWM model aimed at serving as a high fidelity engineering model for transient wind farm calculations. Instead of coupling the individual wind turbines in the analysed wind farm via the interface of an aero-elastic solver, the Standalone DWM model simulates the wind and turbulence fields in the whole wind farm with a ”field model”. The field model transforms the result from the DWM calculation (which is in a coordinate system relative to a single wake-emitting turbine) to a Cartesian grid covering the analysed wind farm. This requires numerical methods for modelling axis-symmetric wake deficit evolution, large scale wake meandering and intra-turbine effects (mainly the build of up wind speed deficit and increased small scale turbulence), as well as engineering approximations for wake merging and large wind farm effects.

The key benefits compared to other engineering wake models used in the industry:

All figure numbers and references refer to numbering in the PhD Thesis: ”A consistent turbulence formulation for the dynamic wake meandering model in the atmospheric boundary layer”, which is freely available for download at: http://orbit.dtu.dk/en/publications/a-consistent-turbulence-formulation-for-the-dynamic-wake-meandering-model-in-the-atmospheric-boundary-layer%280222ac75-fd0b-42e0-9345-aa3dc493bd71%29.html