Modern Energy has developed a physics based method for calculating pre-construction ice-loss based on climatic input from high-resolution WRF calculations and turbine specific parameters.

The ice-loss model consists of the following steps:

Local temperature, liquid cloud water content and wind conditions give the potential for icing. This input can be either simulated in WRF or measured at site.

2) Numerical simulation of Ice-dynamics up due to local conditions

The ice-dynamics and production losses are included as calibrated sub-modules to calculate time series of ice-accretion, reduction (melting, sublimation & mechanical shedding) as well as loss of turbine performance.

Production losses due to ice are dependent on turbine control strategy and trigger points.

The effect of a de-icing system varies based on technical configuration, turbine control settings and local weather. As a rule of thumb a modern de-icing system can achieve a reduction in production loss due to ice of roughly 50%.

We have verified our WRF model configuration used to generate climatic data for the ice-loss calculations against met-mast and ceilometer data from both coastal and inland conditions in Scandinavia, and our ice-loss analysis model has been calibrated against production data from a wide range of climatic conditions and resulting ice-loads. The figure below shows part of the model validation against field data from four wind farms with low, moderate and high ice-losses over a period of three years.

As can be seen, overall fair agreement is achieved for all sites both in terms of long term ice-loss and annual variability. There are some deviations for individual years with less ice. There is one “extreme” year for one of the sites which is captured well considering the abnormal conditions for that location. 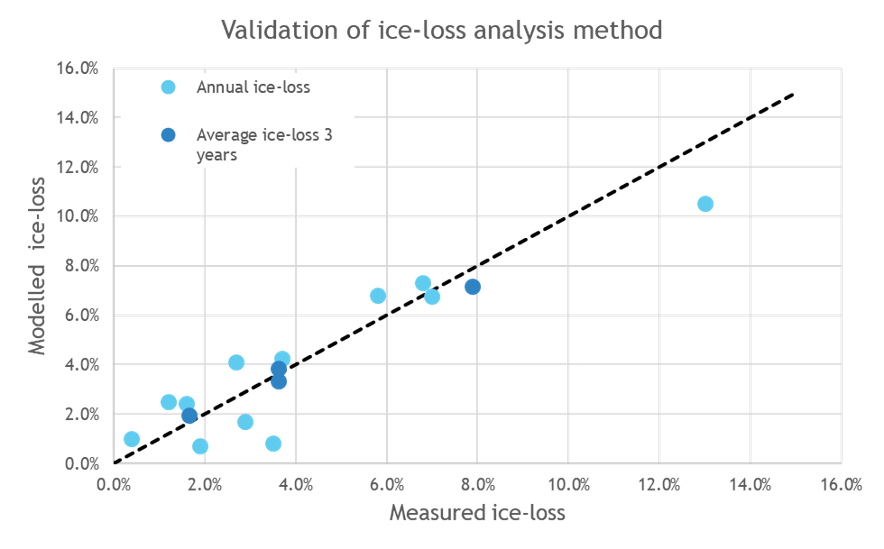 Modern Energy use a combined two-dimensional height and terrain correction. The correction is based on populating a grid covering the surroundings of the studied wind farm by conducting local ice-loss calculations at each point. These grid points are subsequently used to create a two-dimensional surface of expected ice-loss at the correct terrain elevation. The ice-loss at each turbine location is finally extrapolated based on a two-dimensional surface. This method corrects both for deviations in terrain elevation and the horizontal effects (due to shape, orientation and steepness of local terrain) in a physical manner. This limits the need for vertical extrapolation of the results, and gives a more accurate basis for estimating local ice-loss at the turbine locations. 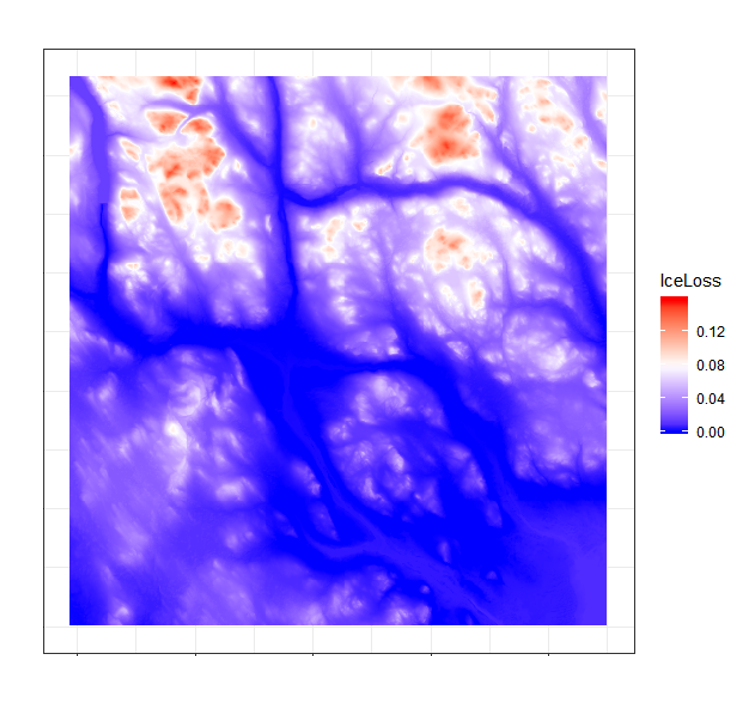