Modern Energy use a method to correct for a statistical bias which arise in wind farm yield estimates due to asymmetric uncertainty distributions of the applied losses, and the nonlinear response in turbine production. The necessity for such a correction is evident by considering the effect of uncertainty in the on-coming wind speed distribution on the production of a wind turbine. Due to the shape of the power curve, variations in wind speed will result in a skewed response in AEP. For a site where the mean wind speed is higher than 50% of the rated wind speed of the turbine (in practice all sites with sufficiently high wind speed to motivate the establishment of a wind farm) a reduction in mean wind will cause a larger reduction in AEP than a corresponding increase in mean wind would increase the AEP. Consequently, the expected AEP response when considering the uncertainty of the wind will be lower than the expected AEP based on the most probable incoming wind. 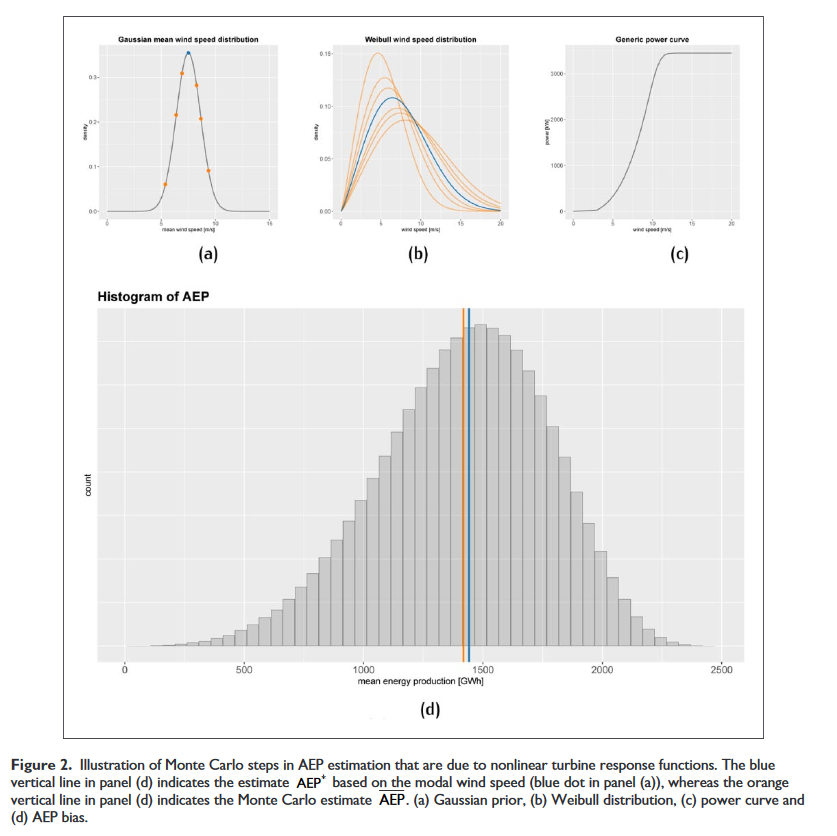 This is illustrated in the figure to the right. Panel a shows a realistic distribution of expected mean wind speed (including Gaussian uncertainty) for a wind farm development. Panel b depict the seven Weibull distributions resulting from seven dots in panel a. The blue curve represent the most probable distribution (associated with the modal mean wind speed). In reality the method consider several thousands of Weibull distributions, these seven are only selected to provide an example. The AEP of each of the Weibull distribution is found by cross-multiplication of the wind distributions (in panel b) and the turbine power curve (in panel c). This gives the distribution of expected AEP in panel d. The average value (orange line) of this distribution is the appropriate vale to use in wind resource estimate. The use of the model wind speed results in the blue line. The difference between these two estimates represent the statistical bias in the current standard method of the wind industry. A sensitivity study shows that the bias due to wind speed uncertainty and nonlinear turbine response will be on the order of 0.5−1.5% of expected AEP. Furthermore, the effect on expected AEP due to asymmetrical distributions of site specific losses, eg. loss of production due to ice, can constitute additional losses of several percentage-points.

Modern Energy applies a general Monte Carlo approach to calculate this effect, where the expected AEP of the wind farm is calculated for a sample of varying inflow conditions to capture the effect of the uncertainty distribution of the on-coming wind. The method has been subjected to peer-review and has been published in the journal of wind engineering.

The published paper can be downloaded here: Monte Carlo methods to include the effect of asymmetrical uncertainty sources in wind farm yield assessment